The steps outlined in the gray box below we have already discussed, and we will now continue to describe the steps in an end-to-end gene-level RNA-seq differential expression workflow.

So what does the count data actually represent? The count data used for differential expression analysis represents the number of sequence reads that originated from a particular gene. The higher the number of counts, the more reads associated with that gene, and the assumption that there was a higher level of expression of that gene in the sample.

The differential expression analysis steps are shown in the flowchart below in green. First, the count data needs to be normalized to account for differences in library sizes and RNA composition between samples. Then, we will use the normalized counts to make some plots for QC at the gene and sample level. Finally, the differential expression analysis is performed using your tool of interest.

The counts of mapped reads for each gene is proportional to the expression of RNA (“interesting”) in addition to many other factors (“uninteresting”). Normalization is the process of scaling raw count values to account for the “uninteresting” factors. In this way the expression levels are more comparable between and within samples.

RPKM/FPKM (not recommended for between sample comparisons)

The next step in the differential expression workflow is QC, which includes sample-level and gene-level steps to perform QC checks on the count data to help us ensure that the samples/replicates look good.

A useful initial step in an RNA-seq analysis is often to assess overall similarity between samples:

Sample-level QC allows us to see how well our replicates cluster together, as well as, observe whether our experimental condition represents the major source of variation in the data. Performing sample-level QC can also identify any sample outliers, which may need to be explored to determine whether they need to be removed prior to DE analysis.

Generally, we focus on PC1 and PC2 (which explain the largest amounts of variation in the data) and plot them against each other. In an ideal experiment, we would expect all replicates for each sample group to cluster together and the sample groups to cluster apart in the PCA plot as shown below.

In this example, the metadata for the experiment is displayed below. The main condition of interest is treatment.

When visualizing on PC1 and PC2, we don’t see the samples separate by treatment, so we decide to explore other sources of variation present in the data. We hope that we have included all possible known sources of variation in our metadata table, and we can use these factors to color the PCA plot.

We start with the factor cage, but the cage factor does not seem to explain the variation on PC1 or PC2.

Then, we color by the sex factor, which appears to separate samples on PC2. This is good information to take note of, as we can use it downstream to account for the variation due to sex in the model and regress it out.

Next we explore the strain factor and find that it explains the variation on PC1.

It’s great that we have been able to identify the sources of variation for both PC1 and PC2. By accounting for it in our model, we should be able to detect more genes differentially expressed due to treatment.

Worrisome about this plot is that we see two samples that do not cluster with the correct strain. This would indicate a likely sample swap and should be investigated to determine whether these samples are indeed the labeled strains. If we found there was a switch, we could swap the samples in the metadata. However, if we think they are labeled correctly or are unsure, we could just remove the samples from the dataset.

We find that the samples separate by treatment on PC3, and are optimistic about our DE analysis since our condition of interest, treatment, is separating on PC3 and we can regress out the variation driving PC1 and PC2.

Even if your samples do not separate by PC1 or PC2 or you can’t identify the sources of variation, you may still get biologically relevant results from the DE analysis, just don’t be surprised if you do not get a large number of DE genes. To give more power to the tool for detecting DE genes, it is best to account for major, known sources of variation in your model if you can identify them; this includes batch effects.

For details regarding the calculations performed for PCA, we encourage you to explore StatQuest’s video.

The figure below was generated from a time course experiment with sample groups, Ctrl and Sci and the following timepoints: 0h, 2h, 8h, and 16h.

Similar to PCA, hierarchical clustering is another, complementary method for identifying strong patterns in a dataset and potential outliers. The heatmap displays the correlation of gene expression for all pairwise combinations of samples in the dataset. Since the majority of genes are not differentially expressed, samples generally have high correlations with each other (values higher than 0.80). Samples below 0.80 may indicate an outlier in your data and/or sample contamination.

The hierarchical tree can indicate which samples are more similar to each other based on the normalized gene expression values. The color blocks indicate substructure in the data, and you would expect to see your replicates cluster together as a block for each sample group. Additionally, we expect to see samples clustered similar to the groupings observed in a PCA plot.

In the plot below, we would be a bit concerned about ‘Wt_3’ and ‘KO_3’ samples not clustering with the other replicates. We would want to explore the PCA to see if we see the same clustering of samples.

The figure below was generated from an experiment with sample groups ‘Mov10_oe’, ‘Irrel_kd’ and ‘Mov10_kd’. 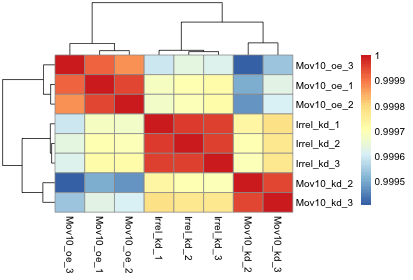 In addition to examining how well the samples/replicates cluster together, there are a few more QC steps. Prior to differential expression analysis it is beneficial to omit genes that have little or no chance of being detected as differentially expressed. This will increase the power to detect differentially expressed genes. The genes omitted fall into three categories:

DESeq2 will perform this filtering by default; however other DE tools, such as EdgeR will not. Filtering is a necessary step, even if you are using limma-voom and/or edgeR’s quasi-likelihood methods. Be sure to follow pre-filtering steps when using these tools, as outlined in their user guides found on Bioconductor as they generally perform much better.