The Tidyverse suite of integrated packages are designed to work together to make common data science operations more user friendly. The packages have functions for data wrangling, tidying, reading/writing, parsing, and visualizing, among others. There is a freely available book, R for Data Science, with detailed descriptions and practical examples of the tools available and how they work together. We will explore the basic syntax for working with these packages, as well as, specific functions for data wrangling with the ‘dplyr’ package and data visualization with the ‘ggplot2’ package. 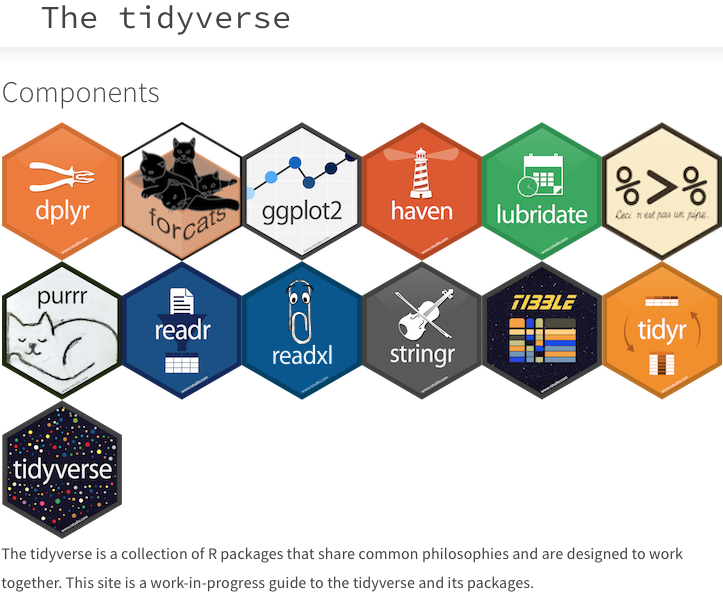 The Tidyverse suite of packages introduces users to a set of data structures, functions and operators to make working with data more intuitive, but is slightly different from the way we do things in base R. Two important new concepts we will focus on are pipes and tibbles.

Before we get started with pipes or tibbles, let’s load the library:

Stringing together commands in R can be quite daunting. Also, trying to understand code that has many nested functions can be confusing.

To make R code more human readable, the Tidyverse tools use the pipe, %>%, which was acquired from the magrittr package and is now part of the dplyr package that is installed automatically with Tidyverse. The pipe allows the output of a previous command to be used as input to another command instead of using nested functions.

NOTE: Shortcut to write the pipe is shift + command + M

An example of using the pipe to run multiple commands:

The pipe represents a much easier way of writing and deciphering R code, and so we will be taking advantage of it, when possible, as we work through the remaining lesson.

A core component of the tidyverse is the tibble. Tibbles are a modern rework of the standard data.frame, with some internal improvements to make code more reliable. They are data frames, but do not follow all of the same rules. For example, tibbles can have numbers/symbols for column names, which is not normally allowed in base R.

Important: tidyverse is very opininated about row names. These packages insist that all column data (e.g. data.frame) be treated equally, and that special designation of a column as rownames should be deprecated. Tibble provides simple utility functions to handle rownames: rownames_to_column() and column_to_rownames().

Tibbles can be created directly using the tibble() function or data frames can be converted into tibbles using as_tibble(name_of_df).

NOTE: The function as_tibble() will ignore row names, so if a column representing the row names is needed, then the function rownames_to_column(name_of_df) should be run prior to turning the data.frame into a tibble. Also, as_tibble() will not coerce character vectors to factors by default.

We’re going to explore the Tidyverse suite of tools to wrangle our data to prepare it for visualization. You should have downloaded the file called gprofiler_results_Mov10oe.tsv into your R project’s data folder earlier.

If you do not have the gprofiler_results_Mov10oe.tsv file in your data folder, you can right click and download it into the data folder using this link.

The functional analysis that we will focus on involves gene ontology (GO) terms, which:

Goal: Visually compare the most significant biological processes (BP) based on the number of associated differentially expressed genes (gene ratios) and significance values by creating the following plot: 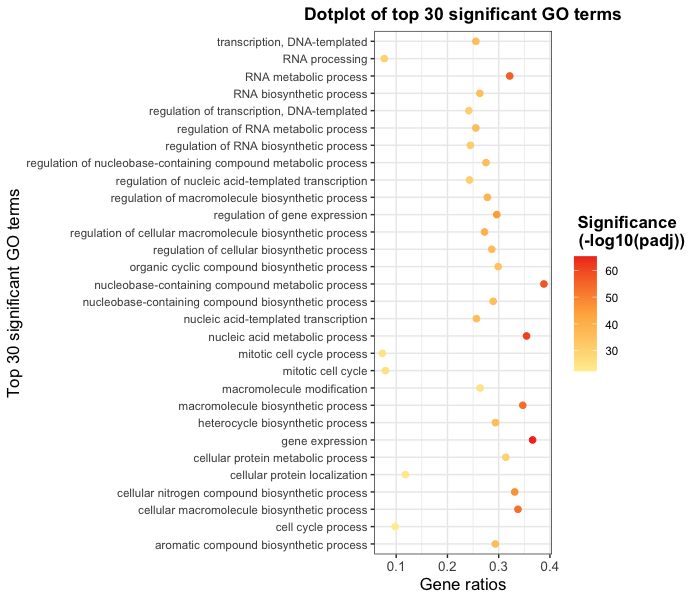 To wrangle our data in preparation for the plotting, we are going to use the Tidyverse suite of tools to wrangle and visualize our data through several steps:

While all of the tools in the Tidyverse suite are deserving of being explored in more depth, we are going to investigate more deeply the reading (readr), wrangling (dplyr), and plotting (ggplot2) tools.

1. Read in the functional analysis results

Notice that the results were automatically read in as a tibble and the output gives the number of rows, columns and the data type for each of the columns.

NOTE: A large number of tidyverse functions will work with both tibbles and dataframes, and the data structure of the output will be identical to the input. However, there are some functions that will return a tibble (without row names), whether or not a tibble or dataframe is provided.

2. Extract only the GO biological processes (BP) of interest

Now that we have our data, we will need to wrangle it into a format ready for plotting. For all of our data wrangling steps we will be using tools from the dplyr package, which is a swiss-army knife for data wrangling of data frames.

To extract the biological processes of interest, we only want those rows where the domain is equal to BP, which we can do using the filter() function.

To filter rows of a data frame/tibble based on values in different columns, we give a logical expression as input to the filter() function to return those rows for which the expression is TRUE.

Now let’s return only those rows that have a domain of BP:

Now we have returned only those rows with a domain of BP. How have the dimensions of our results changed?

We would like to perform an additional round of filtering to only keep the most specific GO terms.

3. Select only the columns needed for visualization

To extract columns from a data frame/tibble we can use the select() function. In contrast to base R, we do not need to put the column names in quotes for selection.

Now that we have only the rows and columns of interest, let’s arrange these by significance, which is denoted by the adjusted p-value.

Let’s sort the rows by adjusted p-value with the arrange() function.

NOTE: If you wanted to arrange in descending order, then you could have run the following instead:

5. Rename columns to be more intuitive

While not necessary for our visualization, renaming columns more intuitively can help with our understanding of the data using the rename() function. The syntax is new_name = old_name.

NOTE: In the case of two packages with identical function names, you can use :: with the package name before and the function name after (e.g stats::filter()) to ensure that the correct function is implemented. The :: can also be used to bring in a function from a library without loading it first.

Rename the intersection column to genes to reflect the fact that these are the DE genes associated with the GO process.

Finally, before we plot our data, we need to create a couple of additional metrics. The mutate() function enables you to create a new column from an existing column.

Our final data for plotting should look like the table below:

Now that we have our results ready for plotting, we can use the ggplot2 package to plot our results. If you are interested, you can follow this lesson and dive into how to use ggplot2 to create the plots with this dataset.